When my father was a child in Korea, he often followed my grandmother to their local bangatgan (mill). There, she dropped off two types of rice—short-grain rice and chapssal (sweet rice)—that were soaked in water for hours, then milled into flour. The sweet rice flour was set aside for her to use as she wanted, but the folks at the bangatgan would take the maepssal garu (moist rice flour), steam it for roughly 30 minutes, and push it through an extruder two or three times. As coils of pillow-like ddeok slithered into a cold-water bath, they would be cut into short pieces of cylindrical, smooth rope and arranged into uniform rows. This ddeok, known as garaeddeok, is chewy, almost sticky, with a subtle sweetness, and my father would snack on a piece as he walked home with my grandmother, carrying their sweet rice flour and garaeddeok. Over the next few days, the family would eat the ddeokbokki (stir-fried ddeok) and ddeokguk (rice cake soup) my grandmother would make—or simply snack on plain ddeok sprinkled with a little sugar.

Ddeok, sometimes called Korean rice cakes, is an integral part of Korea’s rich cuisine and a food that goes back centuries. Its earliest historical reference is found in documents about the wars between Korea and China around 500 BC, when ddeok was a ceremonial food reserved for the upper class. As rice production became more widespread in Korea, ddeok started to be consumed by people of all classes, adapted as necessary to their circumstances. The many versions of ddeok today can be traced back to times of famine, when Koreans resorted to making ddeok with whatever grains they had available instead of simply rice.

Even with this long history, the cooking of ddeok has changed significantly in the last few decades, as Korea rapidly industrialized after the war. The traditional bangatgans of my father’s childhood are fading, as garaeddeok today is made in factories for easy transport to frozen sections in Asian markets all around the world. Some types of ddeok are best eaten fresh, and some are reserved for important holidays—for example, during Chuseok, the autumn harvest moon festival, Koreans eat songpyeon, half-moon-shaped rice cakes filled with a sweet paste and traditionally steamed on pine needles. For babies’ one-year celebrations, it’s common to see tall, rainbow rice cakes. For Lunar New Year, Koreans eat ddeokguk, a light soup made with garaeddeok that’s been sliced into medallions.

“The chopped cheese is such an American street dish, in the same way that ddeokbokki is a street food in Korea.”

Of all the different types of ddeok, garaeddeok is the most versatile, a dynamic ingredient that’s perfect for allowing Korean American chefs and home cooks to tap into nostalgia, play around with modern cultural influences, and bridge the past and present. Made with nothing but rice flour, garaeddeok’s subtle flavor and chewy-but-soft texture make it perfect for stir-fries, soups, and stews (like budae jjigae), or even instant ramyeon. Here in the United States, people likely know ddeok best in ddeokbokki—fresh or previously frozen ddeok stir-fried in a sometimes-spicy gochujang-based sauce. We often see it prepared with sliced napa cabbage, seared fish cakes, and chopped onions, but in Korea, it’s a popular street food, served simply at carts and in tents, often skewered on a wooden stick.

Stephanie Bender, who runs the pop-up Seoul Chikin in Atlanta, says that traditional ddeokbokki depends on two things: the quality of the ddeok and the sauce. Her ideal ddeokbokki is the simple street variety she ate during her ten years living in Korea: a plastic bag of ddeok covered in sauce, with no fish cakes or cabbage or anything else. “You open it,” she says over Zoom, “and it’s just chewy, fresh ddeok, with just the gochujang sauce they made with it. Nothing else. It’s super simple, and you get a toothpick, and you eat it.”

Bender tries to re-create this street food vibe at her pop-up, where she uses ddeok in different dishes, from ddeokbokki to rabokki (stir-fried ramyeon with ddeok) to ddeokkkochi (fried ddeok on a skewer), articulating the versatility of a food that is often wedged into a fiery, saucy corner. Her current offering is something she calls a chicken cup—double-fried Korean chicken nuggets, bite-size pieces of ddeok crisped in a pan, sauce, and garnishes. She serves it with toothpicks. 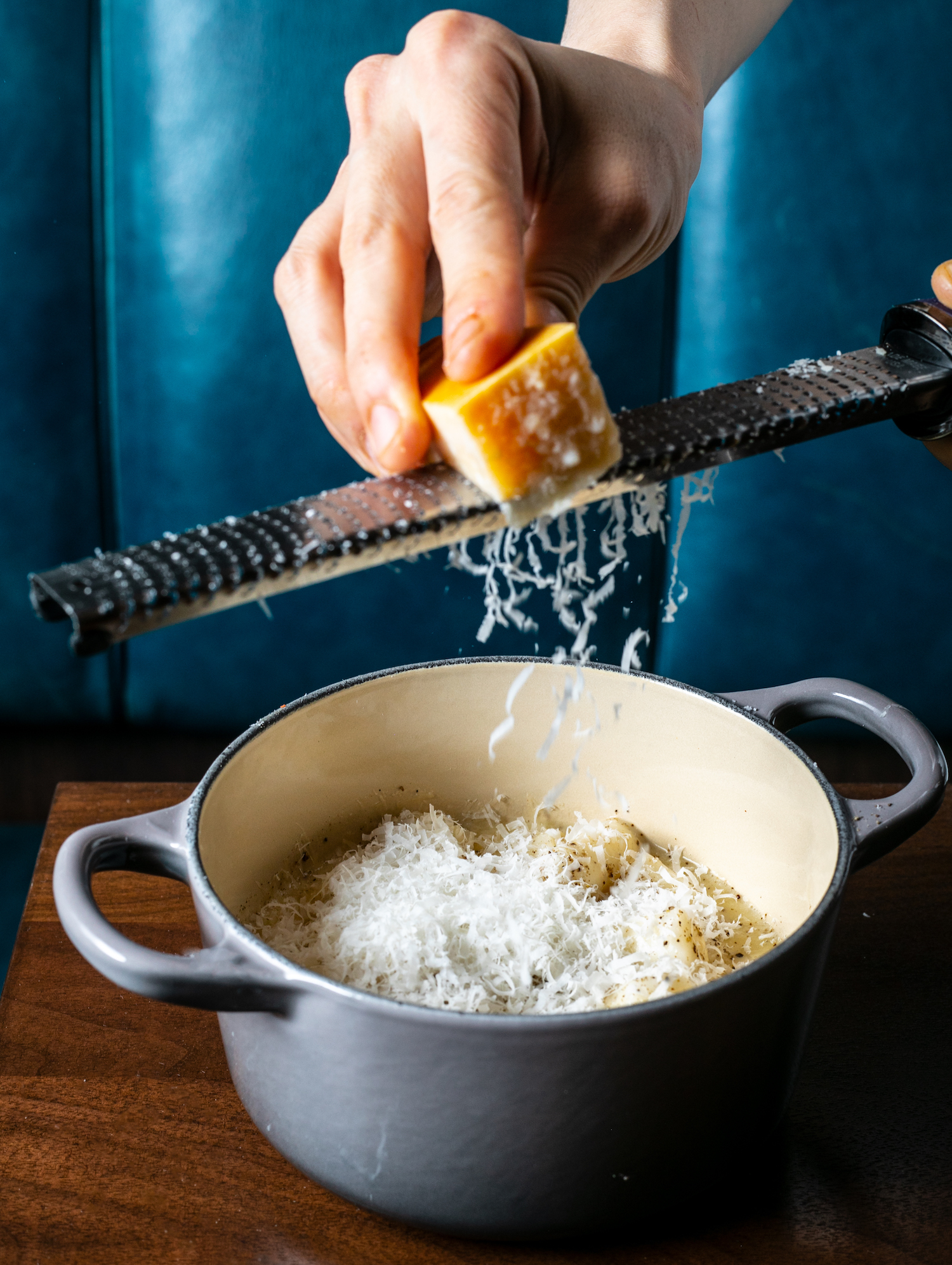 Bender might be working within a more familiar Korean tradition, but we’re seeing a great deal of creativity as Korean American chefs are taking ddeok and putting their own spin on it. At Momofuku Ssäm Bar, former executive chef Eunjo Park served ddeok as cacio e pepe, soft rice cakes covered in cheese and shaved truffles. Across the country at Hanchic in Los Angeles, chef Kyungbin Min takes rice cakes, crisps them up on the outside, and serves them in a spicy pork ragu.

Back in New York City, at Nowon, chef/owner Jae Lee takes two street foods—ddeokbokki from Korea, chopped cheese from New York City—and brings them together. “The chopped cheese is such an American street dish, in the same way that ddeokbokki is a street food in Korea,” he says. Lee approached his dish thoughtfully, incorporating Korean ingredients into the whole thing. “It’s not just ddeok that’s Korean. There’s some doenjang in it, too . . . And we finish it with soy-pickled jalapeños.”

Similarly, at her Brooklyn-based pop-up Doshi, chef Susan Kim recently served a dish that tossed ddeok with grilled halloumi, playing with the visual similarities between the two ingredients. She described it as “paying homage to the ddeokbokki sauce,” as she tossed the ddeok, halloumi, and garlic scapes in a gochujang sauce slicked with brown butter and a variety of chiles.

When I ask her about her inspiration, though, Kim takes it back to simplicity. “For me, if everything goes back to some sort of nostalgia, it’s my mom making goonddeok on the stove. She would just sprinkle it with salt and sugar.”

The beauty of ddeok is this versatility, that it can be eaten with a variety of sauces or just plain—panfry it with sesame oil until the outside is crispy, the insides soft. You could eat it on its own, just like that, or you could try it the way I personally like it best, the way my mother taught me: dipped into peanut butter, the nutty creaminess a delightful contrast to the crispy, chewy sweetness of the ddeok.