Among the wide world of yuba mock meats and seitan patties, there’s a mushroom that has been rising from its slumber as a worthy meaty substitute. Wake not a sleeping lion, the saying goes. But if we’re speaking of lion’s mane mushrooms, and its awakening comes with nutty umami and a texture that rivals meat, I say prod away.

Lion’s mane—or, if you know it by its scientific name, Hericium erinaceus—is a furry, globular fungus that resembles fist-size beige pom-poms. It is firmer and stringier than most mushrooms, with a subtly sweet woodiness and a texture closer to succulent chicken breast than squeaky-soft button mushrooms. What was once a niche fungus is experiencing budding growth; you might’ve even spotted lion’s mane growing kits at your local farmers’ market recently or during bouts of online grocery shopping.

For centuries if not millennia prior, the fungus has been used in Chinese traditional medicine. In Chinese, it’s known as hou tou gu (猴头菇), which translates not to “lion’s mane” but “monkey’s head,” again an allusion to it shaggy, fur-clad appearance. 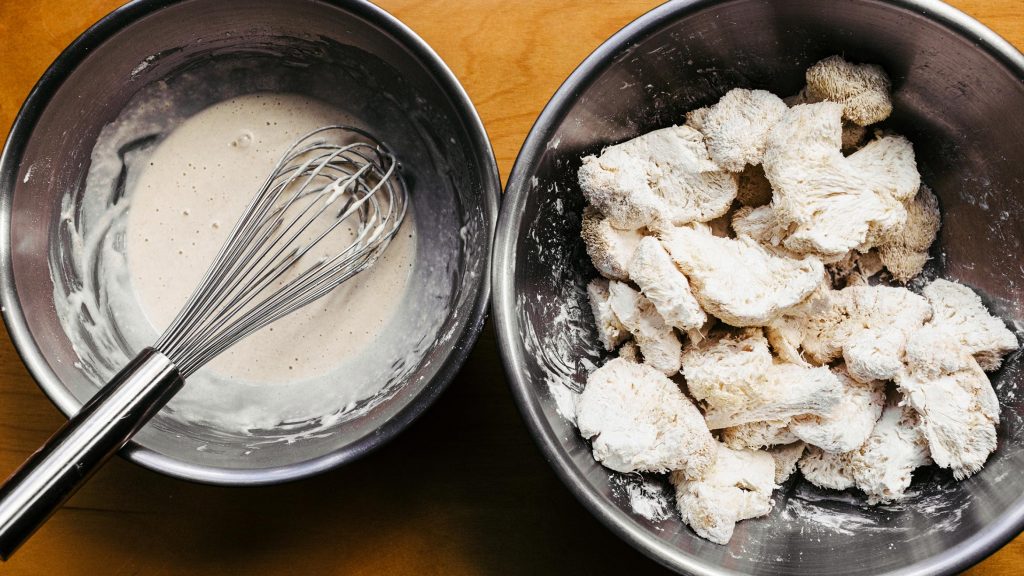 The medicinal claims of lion’s mane include a whole hot pot of preventative health benefits, from “antibiotic, anticarcinogenic, antidiabetic” qualities to “the improvement of anxiety,” according to the Journal of Agricultural and Food Chemistry.

As such, it is a common ingredient in medicinal braises and qi-balancing broths in traditional Chinese medicine (TCM), although its use has spread to more culinary, flavor-driven purposes in the past decade—as evidenced on past trips to Hong Kong and Shanghai, where I’ve seen it braised in a rich soy sauce broth, stir-fried together with baby corn and snap peas, and even rolled in lychee-based sweet and sour sauce.

And the hardy, firm bite of lion’s mane, unlike squeaky tofus or often-mushy grain-based proteins, is the big reason why it’s been so popular in plant-based cooking, either in large, bite-size shreds or minced into a chunky duxelle. Peggy Chan, the chef and activist behind the now-closed vegetarian restaurant Grassroots Pantry in Hong Kong’s Sheung Wan district, turned lion’s mane into a burger patty, “treating the mushroom the same way [she would] a chicken breast.” Chan gives the mushrooms a rough mince, shaping it into a disc which she then breads and deep-fries, before cradling the patty between a pair of vegan burger buns slathered with a smoky sauce reminiscent of Korean yangnyeom fried chicken. Beyond burgers, Chan believes lion’s mane can be employed in so many other dishes, “from popcorn ‘chicken’ to lion’s mane schnitzels, smoked reuben to sweet and sour ‘pork.’”

Tina Barrat, the chef at Hong Kong’s raw vegan restaurant MA . . . and the Seeds of Life, describes the fibrous striations of lion’s mane as “close to crab legs, or even lobster tail,” which led her to make “crab” cakes from them. I’ve also seen lion’s mane used in sweet applications, mashed into a pulp, providing body and structure in vegan pancakes and waffles, or even dehydrated and blitzed into a fine powder as part of a mushroom coffee blend. My favorite renditions of it, though, have to be in my home country of Malaysia, where its meat-like heartiness is fully harnessed in vegetarian rendangs and curries, braised low and slow in coconutty spice pastes scented with fiery chiles, stalks of lemongrass, and chiffonades of makrut lime leaf. 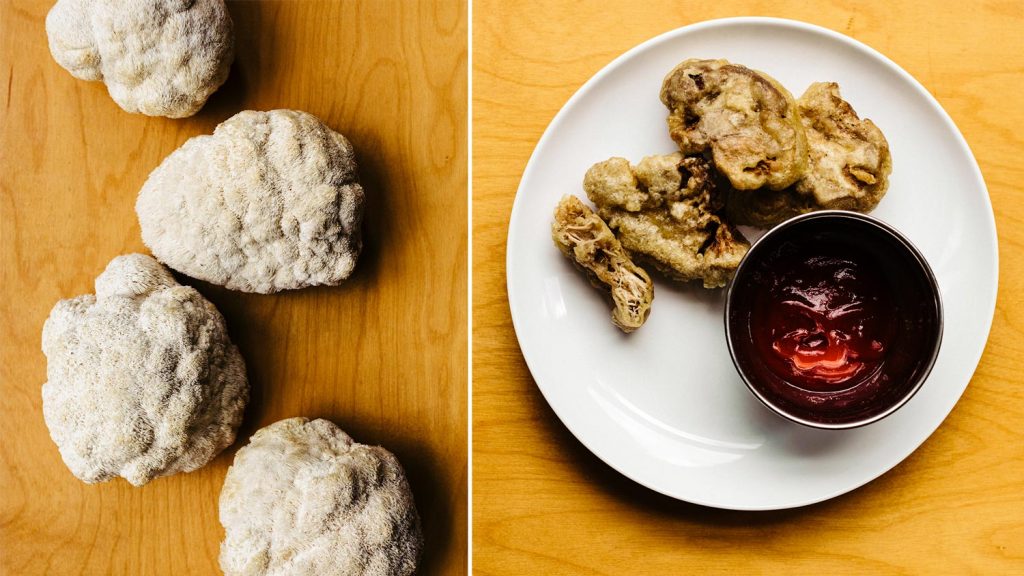 Stateside, lion’s mane has steadily perforated the mainstream vegan vernacular as well. It has appeared in Austin restaurant Hestia, where the pom-poms are grilled and caramelized into meaty morsels, then served atop a charred bread broth; it’s made its way to Atlanta’s 8ARM, where ex–head chef Maricela Vega used it in her vegan tinga tacos; and it’s appeared on pizzas at New York restaurant Rosemary’s, making headway into becoming a breakout vegan ingredient.

Luckily for home cooks, lion’s mane mushrooms are increasingly easy to source in the United States, with artisanal mushroom farms like Brooklyn’s Smallhold and Chicago’s Four Star Mushrooms growing them by the ton. But even in places where fresh lion’s mane is scarce, a quick trip to the Asian grocery can net you some dried lion’s mane, which reconstitutes into its furry form with a two-hour soak in tepid water.

Just like dried shiitake, what dried lion’s mane lacks in the fleshier, fuller texture of its fresh counterpart, it makes up for in a stronger umami punch. Fresh or dried, it’s versatile and forgiving to cook with, easily absorbing any flavor introduced to it without losing its structural integrity.

In a bid to reduce my own meat consumption, and to pacify a sudden, anxiety-induced pang for nuggets (I blame the pandemic, and Malaysia’s latest lockdown), I’ve found that lion’s mane makes excellent meatless nuggets. Just cut them up into two-to-three-inch chunks; batter them in a slurry of cornstarch, flour, garlic powder, and salt; and deep-fry them in oil for five minutes. Served with a sweet Thai chile sauce, or even just with good ol’ ketchup or honey mustard, they’ll give you the same satisfaction any nugget would, with an extra burst of meaty (yet meatless) umami to boot.