While these sandwiches are the perfect thing to share at a brunch, small tea party, or baby/wedding shower, they also make a great easy lunch — such a great alternative to peanut butter and jelly! 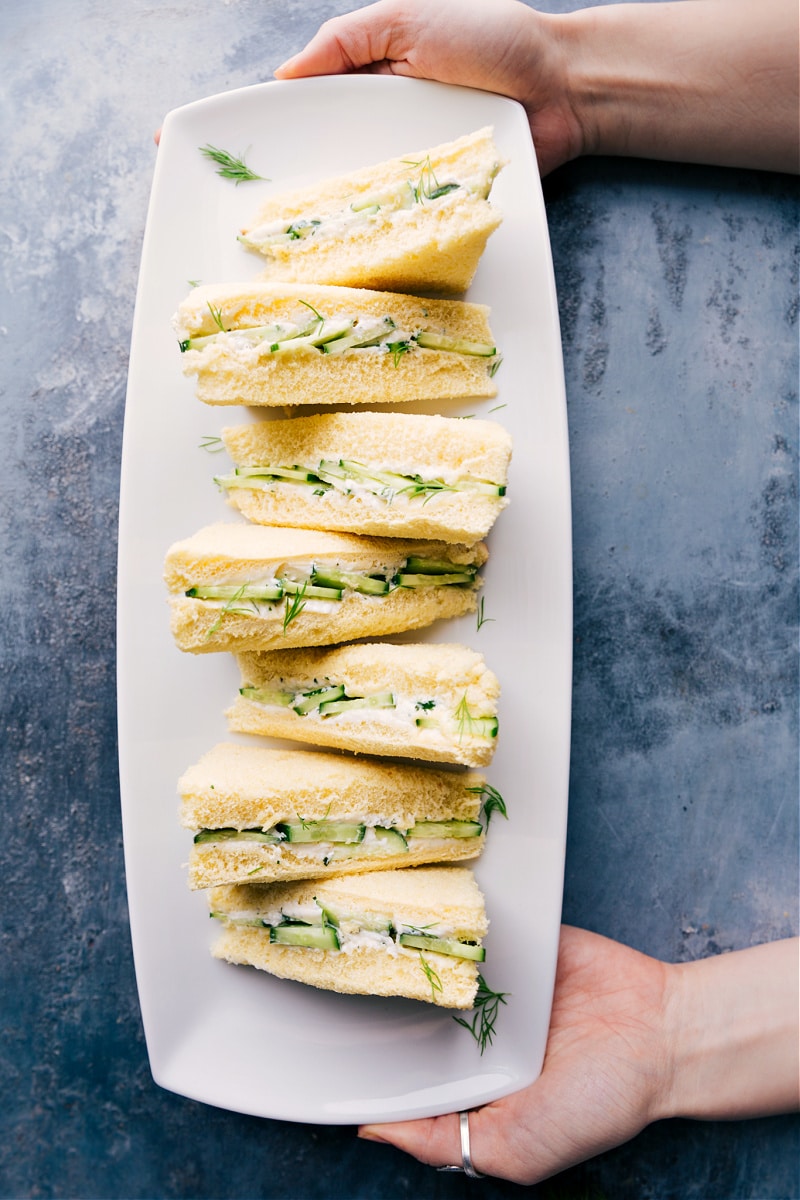 Traditional Cucumber Sandwiches were thin slices of cucumber sandwiched between two thin slices of lightly buttered white bread. The sandwich originated in Europe as a way to serve something in the late afternoon to stave off hunger before late dinners. (Source.)

As they’ve evolved, cucumber sandwiches are now made many different ways — some with fresh herbs, cream cheese, salmon, or even using different types of bread (crusts on or off!).

They’re still typically served as a light snack or at afternoon tea — a more formal, but light meal usually a few hours before a larger meal.

They’re one of my absolute favorite things to serve at baby or bridal showers (especially when hosting for vegetarians!) and I love having them on a brunch table spread. Even though I’m obsessed with this recipe, I’m always a little surprised just how many people go crazy over these innocent-looking sandwiches and want the recipe for them — in fact, they’ll usually be gone quicker than some of the desserts that are being served!

As much as I love a good hearty sourdough or whole-grain bread, this is not the recipe for that type of bread. We want the star of the show to be the cream cheese mixture and the cucumbers. With cucumber sandwiches, less is more. The fewer add-ons and the more subtle the bread, the better the flavor will be.

My absolute favorite bread to use in this recipe is Sara Lee’s® Artesano brioche bread (not sponsored). I actually first used this bread for these Honey and Banana Sandwiches and knew they’d be perfect for Cucumber Sandwiches! The crusts are so subtle with that bread, I don’t bother cutting them off, but you certainly can for a more “posh” looking sandwich.

Persian (sometimes labeled as salad cucumbers) or English cucumbers work the best in cucumber sandwiches — they are, after all, the star of the show here. These varieties of cucumber are less bitter, have fewer seeds, and are more flavorful than regular cucumbers. They are also far crisper and less likely to water down the bread you’re eating.

If you can’t find English/Persian/salad cucumbers, and have to use regular cucumbers, peel them first. Next, slice the cucumber in half lengthwise and scoop out all the seeds. Now, they can be thinly sliced for the sandwiches. We want to peel because the peel is too thick and flavorless and we remove the seeds to keep from watering down the bread. 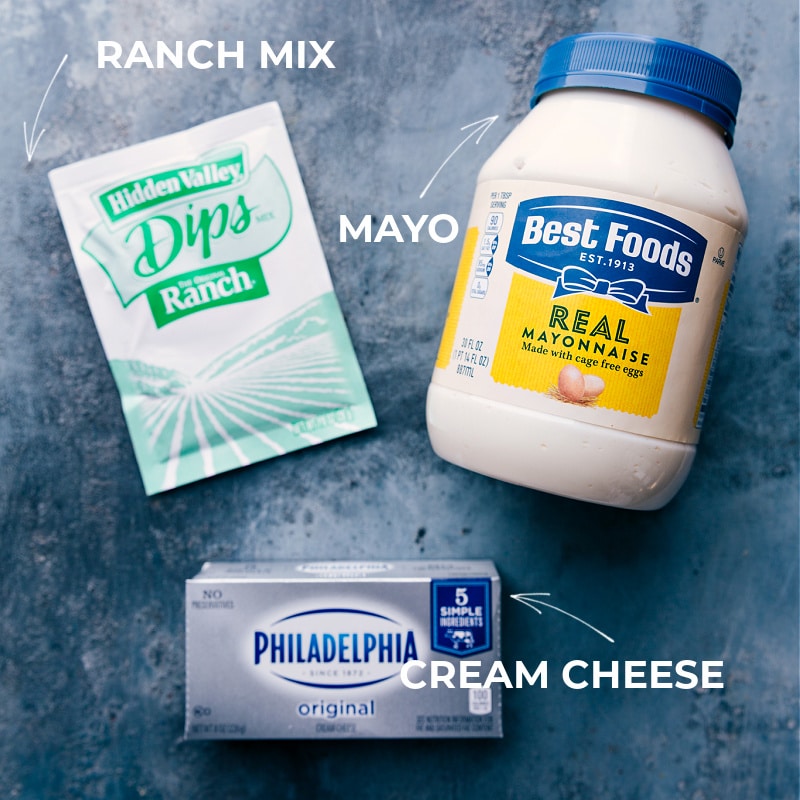 Other Ingredients in Cucumber Sandwiches

Beyond the bread and cucumbers, there are three more essential ingredients in this recipe. With so few ingredients in the sandwich spread, the ingredients used really make a big difference. I’ll describe each below, along with my recommendations (none of the below brands are sponsors of this site or post): 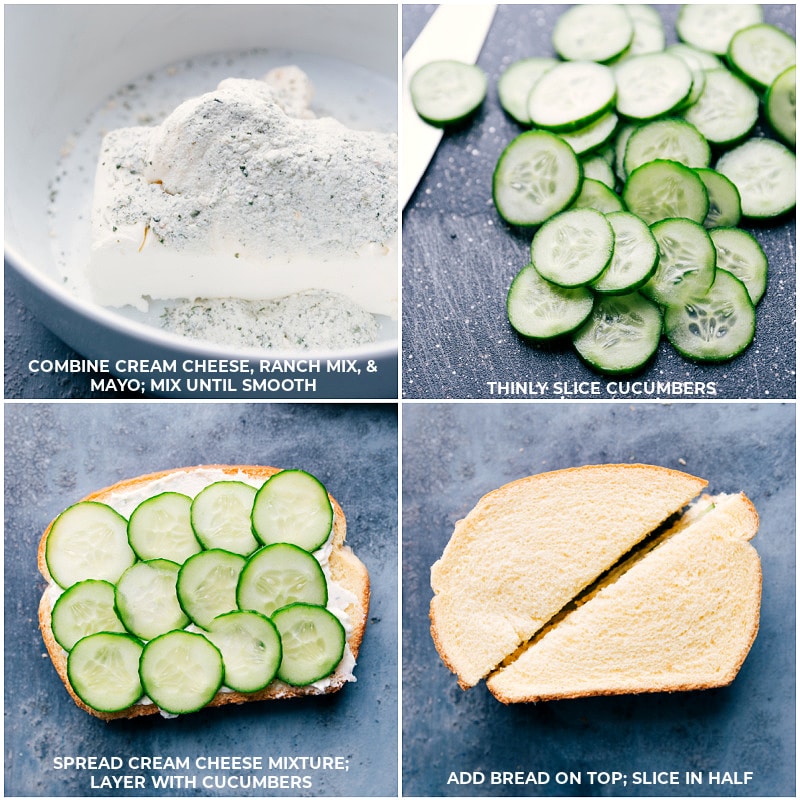 How to make Cucumber Sandwiches

Cucumber sandwiches are so simple to make!

Serving at a party

Since these sandwiches dry out quickly, you’ll want to serve them in batches — refill serving platters as the supply dwindles.

When serving these for a party, we cut them in triangles. I like serving these sandwiches on a cake stand with a glass dome covering. This helps them from drying out overly quickly and it looks fancy! Any cake stand will work or a large white platter also looks nice. 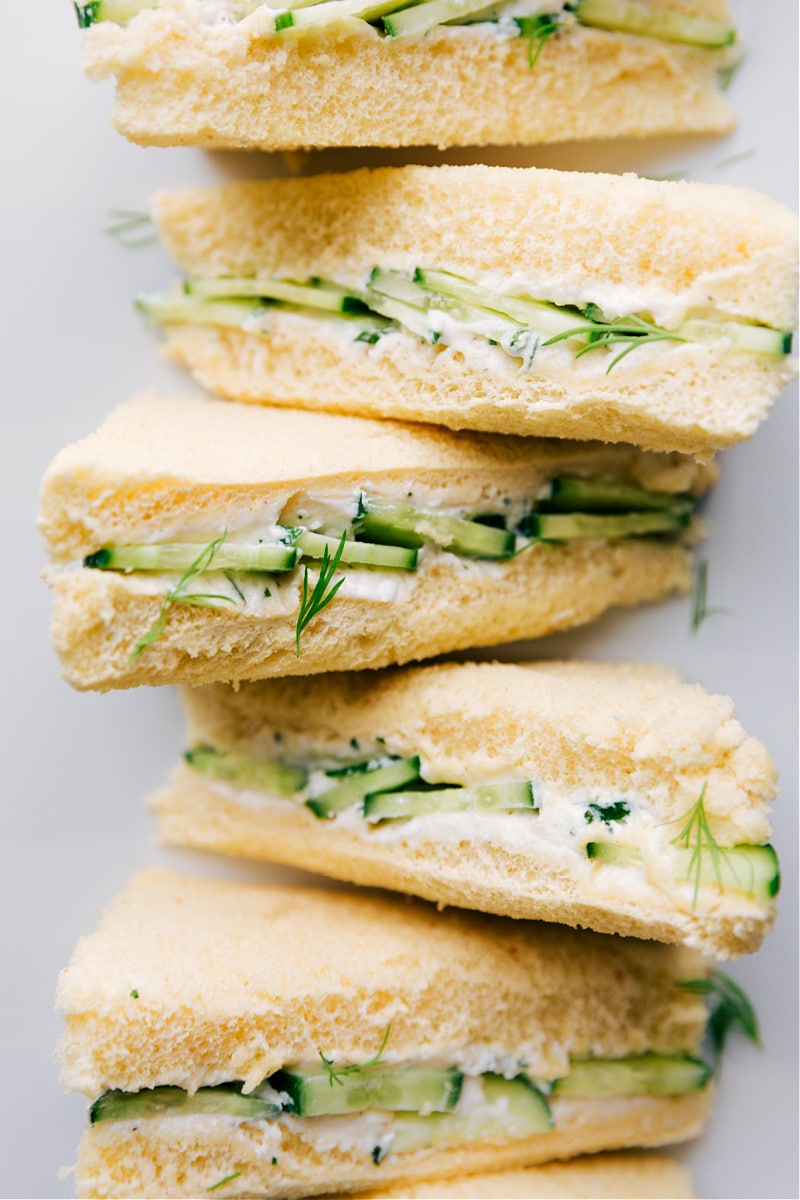 1What Is a Cucumber Sandwich?

These simple sandwiches are made with thin white bread, cucumbers, and some type of spread on the bread — usually butter, cream cheese, or seasoned cream cheese.

They’re often called tea sandwiches since they originated as a tea-time snack in the U.K.

2Why are Cucumber Sandwiches posh?

One reason these sandwiches are seen as posh is because of their visual presentation. They’re typically cut into triangles and often crusts are cut off.

They’ve also come to gain “posh status” because they originated being served at “High Tea” time.

The delicacy of the cucumbers and flavor of the sandwich, the freshness of the sandwiches, and the circumstances in where they’re served are all contributing factors to why people consider them to be fancy or posh.

3How do you keep Cucumber Sandwiches from getting soggy?

Some tips to keep these sandwiches from getting soggy:

4What can you do with cucumbers?

There are so many things to do with cucumbers if you happen to have some leftovers after making these cucumber sandwiches. Below are some of our favorite ways to use leftovers:

Cucumbers are low in calories and high in important vitamins and minerals. They’re also high in water content!

Cucumber sandwiches and tea are said to have originated in the United Kingdom. 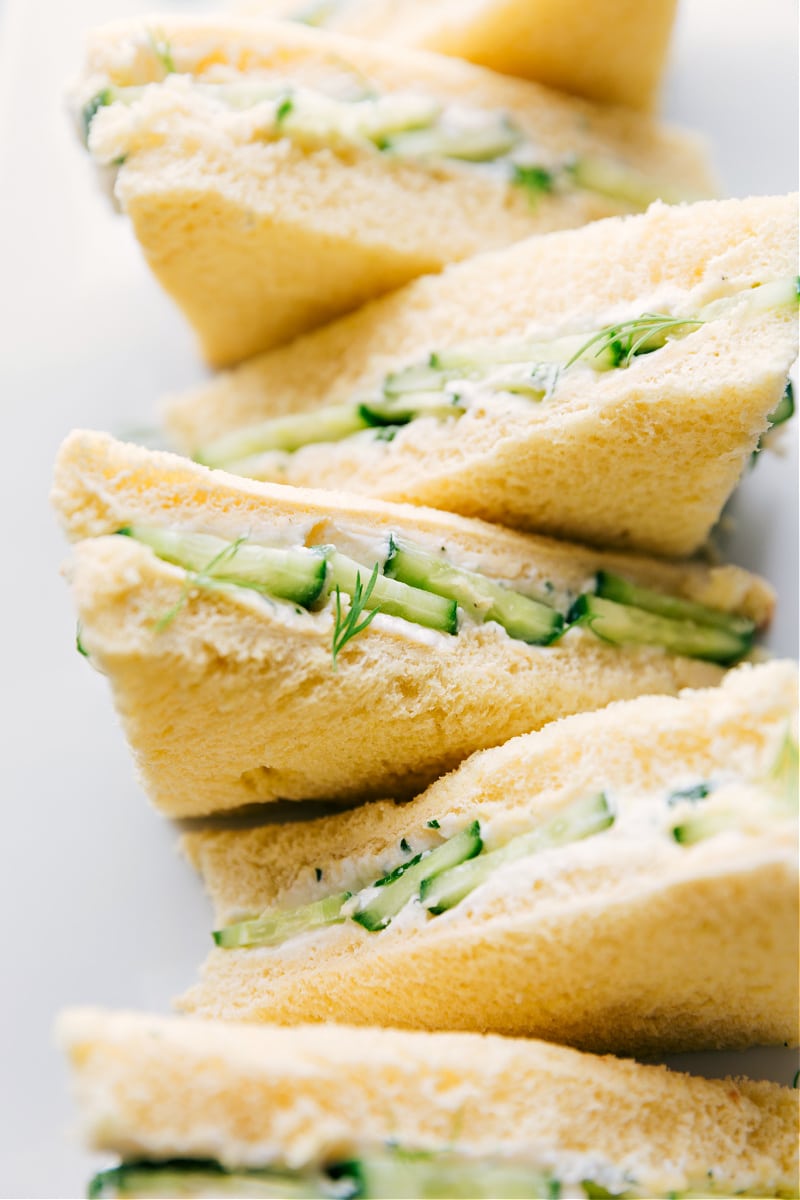 Make ahead of time

Because cucumbers have such a high water content, these sandwiches are best made close to serving time. That said, here are a few make-ahead tips:

Serve some of these recipes alongside these cucumber sandwiches at a party! 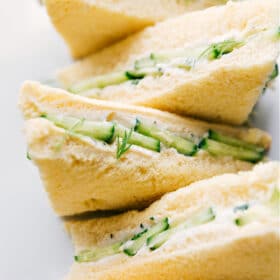 Note 1: My favorite bread to use in this recipe is Sara Lee’s Artesano brioche bread (not sponsored). Any good quality, thin, and soft white bread will work great here.

We do our best to provide accurate nutritional analysis for our recipes. Our nutritional data is calculated using a third-party algorithm and may vary, based on individual cooking styles, measurements, and ingredient sizes. Please use this information for comparison purposes and consult a health professional for nutrition guidance as needed.